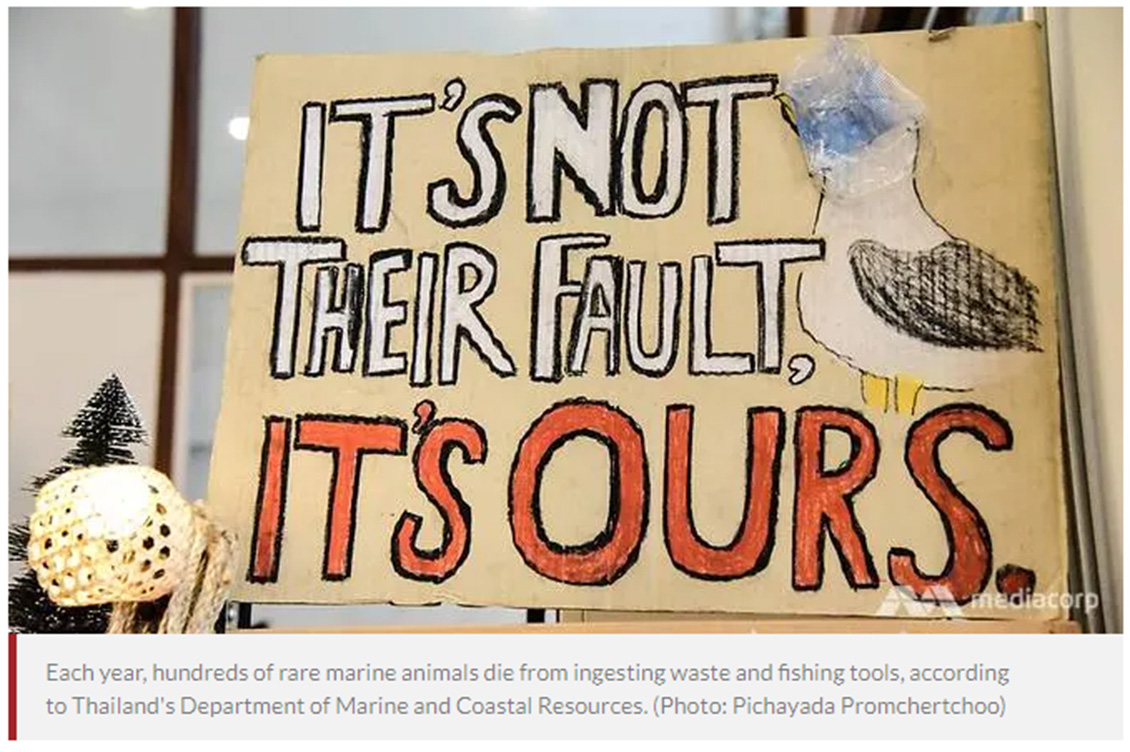 BANGKOK: Since the COVID-19 pandemic emerged, having food delivered at one’s doorstep has become a new normal for many people in Thailand.

But while food delivery services offer more options and convenience to consumers, they have also added tonnes of plastic to Thailand’s struggling waste management system.

Before the health crisis hit, the Southeast Asian country generated about 5,500 tonnes of plastic waste per day, according to Thailand Environment Institute’s (TEI) president Dr Wijarn Simachaya. Today, the number has jumped to 6,300 tonnes, he said.

“The impact of food delivery services is considerable, especially in Bangkok, where the industry has grown tremendously,” he told CNA.


Vegetables are carried in plastics bags at a market in Bangkok, Thailand June 19, 2019. REUTERS/Soe Zeya Tun

Plastic use has soared, even as total waste generated in the Thai capital has decreased.

Bangkok typically produces about 10,500 tonnes of total waste per day, but the number has dropped by 12 per cent since March, largely because the global pandemic has stopped tourists from travelling.

“Still, the amount of plastic waste in Bangkok has gone up during this period. The growth is significant,” Dr Wijarn said, adding the city now generates nearly 3,000 tonnes of plastic waste each day.

The longevity of plastic products, whose original form can last 400 years, results in most of them going into landfills.

According to the Pollution Control Department, plastic accounts for up to 12 per cent of Thailand’s total waste every year – about 2 million tonnes.

However, only 25 per cent of it gets recycled while the remaining is mostly single-use plastic and often end up at dump sites or in waterways.

A child in Bangkok, Thailand swims in a pool filled with plastic bottles during an awareness campaign to mark World Oceans Day on June 8, 2019 AFP/Romeo GACAD

On Jan 1, the country welcomed a nationwide movement to voluntarily ban single-use plastic bags. The ban has received support from the Thai Retailers Association, which owns some 24,500 retail distribution channels nationwide.

But with the ongoing health crisis, Dr Wijarn said the restriction of public movement and a growing reliance on food delivery services, as well as online shopping platforms, has stalled nationwide efforts to reduce plastic waste.

“One delivery order creates on average four plastic items. Some kinds of food like noodle soup come with various condiments in plastic bags. Many kinds of plastic can be recycled but the problem today is that plastic doesn’t always enter the waste system,” he said.

The crisis has posted some obstacles but it’s understandable. The important question is where used plastic goes and how it can be collected systematically.

Thailand is facing a serious environmental challenge caused by millions of tonnes of plastic. In fact, it is the fifth biggest contributor in the world to ocean waste.

A 2015 report by Washington DC-based environmental advocacy group Ocean Conservancy showed more than half of plastic waste in the ocean originated from five rapidly growing economies - China, Indonesia, the Philippines, Vietnam and Thailand.

The magnitude of plastic waste may have made many Thais more eco-conscious. Still a zero-waste or low-plastic lifestyle remains limited to a small network of people largely because life can be cheap and easy with plastic.

While a quarter of plastic waste – mainly plastic bottles – gets recycled each year, single-use plastic items such as cutlery and cup from affordable take-away services often end up at landfills as they are considered worthless and thus not collected by mainstream recycling companies. Veterinarians prepare to examine a dead deer at Khun Sathan National Park in Thailand's Nan province. The animal was found with 7kg of plastic in its stomach. (Photo: AFP/Office of Protected Area Region 13/Handout)

In his effort to resolve the plastic waste problem in Thailand, Kamol Borrisuttanakul started a project in 2018 to extend the life of single-use plastic bags and film. It is called Won, which means "to go in a circle" in Thai.

His company manufactures packaging products such as plastic and paper bags, and recycles single-use plastic in the production.

“This is our role. Won was formed to collect this type of plastic, which didn’t have anywhere to go in the past and generated a lot of plastic waste,” he added.

We also aim to inspire Thais to change the way they dispose of rubbish and to segregate before discarding anything in order to reduce the amount of waste.

Every kilogramme of clean used plastic bags and film collected by Won is worth 5 Baht (US$0.15) and will be donated to environmental foundations. So far, the project has already recycled more than 18,000 kg of plastic.

Since its creation, the project has gained a growing number of participants. It currently has about 160 collection points across Thailand, spanning Chiang Mai in the north to southern border province Pattani. They are located at office buildings, schools, universities and governmental agencies, including some 50 district administration offices in Bangkok.

A number of participants, according to Kamol, are office workers and students. “It’s clear they want to participate in order to change their society,” he said.

Small pieces of plastic are a problem on Thailand's beaches, waterways and sea. (Photo: Jack Board)

As the number of participants has grown, so too has the amount of single-use plastic collected by Won, which grew from a few dozen kilogrammes per month to 4 tonnes per month currently.

Some of it goes back into the production system as plastic resin while other parts are distributed to Won’s business partners, which turn them into crafts and household goods such as rubbish bins.

“This way, plastic gets reutilised in a circular economy,” Kamol said.

In Thailand, waste management remains a struggle and a culture of waste segregation is still in its infancy, according to Dr Wijarn.

With the ongoing health crisis likely to drag on, he expects many people will keep using food delivery services and generate more plastic waste.

“Plastic is cheap. We only think about its usage and not its disposal,” he said.

“Some countries have a deposit-return system, where consumers can borrow plates, bowls and cutlery before returning them later. Sometimes, a collection service is provided after the meal. We should look into this.”

Of some 10,500 tonnes of waste generated in Bangkok each day, Dr Wijarn said only 1,000 tonnes can be incinerated.

“That’s how much our system can accommodate. The rest goes elsewhere to be buried.”

BOOKMARK THIS: Our comprehensive coverage of the coronavirus outbreak and its developments

Download our app or subscribe to our Telegram channel for the latest updates on the coronavirus outbreak: https://cna.asia/telegram
​